What fruits and vegetables are in season?

While the weather in Colorado has been confusing lately. . . snow days in May, then 87 degrees 10 days later, etc. I’ve had a few questions from readers about “what is in season?”.

To answer the question, I’d love to share a blurb from my book Real Food, Real Simple available here and on Amazon.com. . .

Real food is in season. Most Americans get fresh food from the supermarket. Grocery stores stock their produce sections and shelves with food flown in from all over the world. If you think of supermarkets as part of the global food system, where most food travels more than 2,000 miles from where it’s grown to your kitchen, it’s no wonder that you’re probably confused about what’s “in season” and what’s not.

world: grapes from Chile, mangoes from Mexico, and pineapples from Hawaii. Asparagus doesn’t grow in November in the United States; it is a spring vegetable. So if you want to buy asparagus in November, it’s not going to taste nearly as good, because it was probably grown in some faraway country south of the equator and put on a plane to get to you.

Fruits and vegetables are more nutritious and delicious when they are in season. The best way to figure out what’s in season in your area is to go to a farmer’s market. Most farmer’s markets are filled to the brim with local produce at the peak of freshness, grown in your area, and often picked just hours before you buy it. If you can’t make it to a farmer’s market or don’t have one in your area, you can learn to navigate the supermarket for seasonal produce by checking out the Seasonal Produce Chart and reading labels on your food to tell you where it came from. Just be wary when shopping for produce at a grocery store. Just because it may be in season locally, doesn’t mean that grocery stores actually sell the local produce.

Joining a CSA (community supported agriculture) is another great way to get fresh, local, in-season produce each week. No matter where you get your fresh fruit and vegetables from, you can use this chart as a general guide to what is in-season for each season. 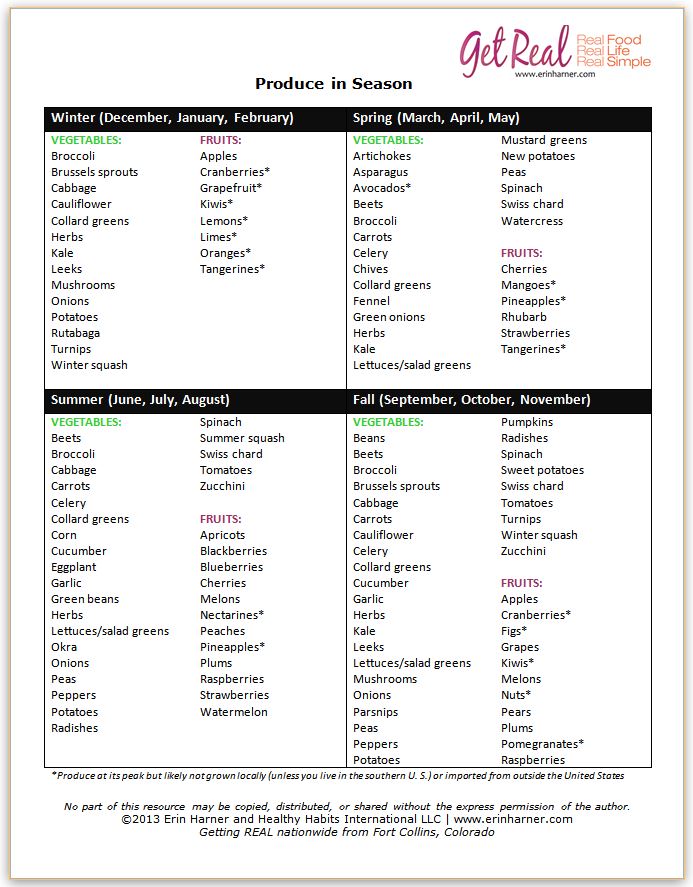 Erin Harner is an Integrative Registered Dietitian Nutritionist (RDN), author, and speaker based in Ithaca, NY. Erin melds functional medicine and culinary nutrition to help her clients uncover their unique diet and confidently cook healthy nourishing meals that meet the needs of their whole family. Learn about Erin's services and connect on Instagram.